Actor Saikumar appears before the court 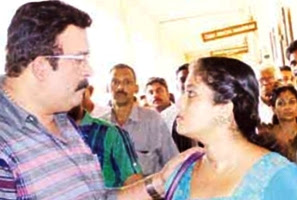 Actor Saikumar on Thursday appeared before the Kollam Chief Judicial Magistrate court for giving statement in a case filed against him by his wife Prasanna Kumari under the protection of Women from domestic violence act. The court posted the case for final hearing on June15. Prasanna Kumari filed a petition in May 2009 followed by a divorce petition by Saikumar in a Family Court. The petition seeks monthly maintainence, protection order and order restraining the respondent (Saikumar) from dispossessing the possession of shared residence. The petition also seeks Sai Kumar to pay the loans over the house and car. The hearing was delayed as Prasanna Kumari had to go treatment for carcinoma. Divorce petition is pending before the Kollam Family court.
Sai Kumar said before the court, “If there are problems in a family, a wife should not go to the court at the initial stage, but at least, when she can not tackle the situation. Prasanna’s allegation that I have certain relationship with an actress of Malayalam film industry is rubbish. Loan payment of car and house is continuing. I do not know about her carcinoma treatment and an amount of Rs 1.76 lakhs was paid to her by Dileep’s company according to AMMA’s instruction”.

The meeting of Saikumar’s daughter Vaishnavni after the court proceeding yesterday after a long gap at the corridors of the court was a cinematic moment. He tapped on her shoulders and asked whether she was okay. Her eyes filled with tears that too made the crowd surrounding them emotional. Prasanna was seen watching this scene far behind the corridor.

Prasanna Kumari has demanded an amount of Rs 45, 000 from Saikumar to meet her monthly expenses. For this same petition Chief Judicial Magistrate has ordered earlier Saikumar to pay an interim payment of Rs 8,000 per mensem to Prasanna Kumari and daughter Vaishnavi. Prasanna Kumari was too a theatre artiste and this acquaintance made them to love and later they married.
Posted by blogdiagnosis at 06:21

Email ThisBlogThis!Share to TwitterShare to FacebookShare to Pinterest
Labels: Actor Saikumar appears before the court