The Film Society Movement, which started in 1960s and gained momentum during the 1970s, brought in a new consciousness about cinema as an art form and stood for a different kind of cinema, which was termed as 'parallel', 'newwave' or 'art' cinema. Contrary to other parts of India, this movement was never an urban phenomenon, but something that cut across all terrains and sections of society. At a point of time, the great classics of World Cinema reached even the rural Kerala and discussions on them were held at the layman's level.

The 'Chitralekha Film Society' formed under the leadership of Adoor Gopalakrishnan and Kulathoor Bhaskaran Nair in 1965 at Trivandrum, was the first Film Society in Kerala, though even before this there was an attempt at Trissur to form a Film Club, namely the Trissur Film Club in 1955. 'Chitralekha' also did work towards formation of Film Societies in Schools and Colleges and also succeed in setting up a film studio of its own. Soon Film Societies were formed at other parts of Kerala.

The Naxalbari agitations, student revolt in Paris, Vietnam war and the hippie movement formed the general ambience of the 1970s. This agitated environment combined with Malayalam literary scene, which was already vibrant with the new 'modernist' ideas became the foundation for the spread of Film Societies all over Kerala during the 1970s. More that a hundred Film Societies sprouted all over Kerala, of which some of them have completed more than 25 year now. Even today, Kerala has the largest number of Film Societies in India and still trying to create awareness about cinema as a serious art form.

Among the Film Societies of Kerala, the 'Odessa' experiment, started by John Abraham, stands apart from all the experiments in various ways. It never had a formal legal structure or any political backing. Its attempt was to attack the problem comprehensively at all levels - exhibition, distribution and production, by ensuring people's participation in all its activities. But with the untimely demise of John Abraham, 'Odessa' movement started waning.
Posted by blogdiagnosis at 00:43 No comments: 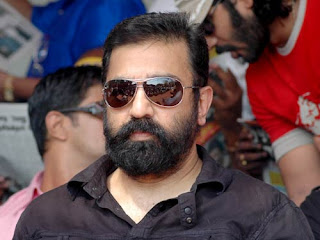 It's almost an unwritten norm in South India, for its popular film actors to make the plunge in politics. Using cinema as a mass medium, most actors later use it as a medium of propaganda for their inherent political ambitions. Several of today's politicians, from Sarathkumar to Napolean, JK Ritheesh and Vijayakanth, hail from tinsel town. Rajini and Vijay are clearly in the foray but it is not known as to when they will turn politicians.
But unlike them, Kamal Haasan has clearly steered away from politics. The closest he ever got to a political issue, if you may call it, was when he complained about his inability to vote as his name didn't feature in the voting list. Despite being the first actor to change to his huge fan following into a social organization, Kamal has never had political ambitions.
When asked about it, Kamal Haasan openly stated that every job had certain qualifications and he didn't have what it takes to be a politician. The actor, in fact, has even kept his political views under wraps, as he says his political leanings will never be revealed to the people.
Posted by malluday at 05:03 No comments: